What sets Alien Arena apart from most other similar shooters, is quite simply, the weaponry.  While the pre-requistite types are there(chaingun, rocket launcher, hit-scan railgun clone), the game sets out to create an experience that is a little more War Of The Worlds and less Quake/Unreal Tournament when it comes to the sights, sounds, and weird guns you’ll find laying about in the demolished levels.  All weapon models were redone for Generation 3 – though, it should be noted that there is some overlap with a couple of them in Generation 2 as the process of them being replaced had begun prior to the decision to completely clean house and redo everything.  Unlike the player models, there is absolutely no evolution for the most part with Alien Arena’s weapon models, so I will only show the Gen 3 models.  All of the new models have much more extensive animations during firing, between firing, and on activation.  Many also have new engine effects added that are not visible here.  NOTE – all of the renders are diffuse+glow only, in Deep Exploration, except for the spider which is using normalmaps.  In-game normal, specular, cube, glow, sub-surface light scatter, etc are all applied.

First up – The Alien Blaster:

The Alien Blaster was an all-new concept for Gen 3, in which the alien characters have a different weapon than the humans.  The difference is all cosmetic, as both blasters have the same capabilities.  Stylistically, it was designed to have a more obvious alien design, and the concept was just something I doodled on an envelope while watching a baseball game one evening.

This weapon was designed with UT3’s “enforcer” in mind as inspiration.  I thought it would be kind of cool to try and design it from memory, and initially it looked far too much like the weapon that inspired it, so I eventually changed parts of it to look less derivative.  Unlike it’s muse, it’s a big, beefy looking weapon by comparison.

This one is probably the one that has the slightest tinge of evolution to it from the Gen 2 version.  The clear glass cover over the rockets was a carryover, and the overall stature and design is similar.

Some ideas such as the revolving bullet clip, and color carried over from Gen 2, but overall this was a completely new concept.  I don’t even recall how I came up with it, I think honestly I just browsed a bunch of chainguns on Google and started getting some ideas and cobbling them together to come up with this.

This was the first of the Gen 3 models, and I distinctly remember thinking of UT3’s Shock Rifle as a jumping off point, I wanted something that had that same feel, and though in the end it doesn’t really resemble it much, it was definitely the source of inspiration.

I created this one at the same time I did the disruptor above.  I was definitely on a UT3 kick, the green pistons, hex patterns, and color definitely popped into my head because of the bio rifle.  I wanted something mean, and very complex looking, and this was what came out.  At the time, this weapon’s complexity far outstripped all of the other Alien Arena weapons, and I knew I’d have to eventually replace all of them to equal that.

This bad boy was redone some time after the beamgun and disruptor, and has undergone several reskinnings.  It’s menacing look is only rivaled by it’s menacing power at melee range.  I fooled with the color schemes and finally came up with one that is complimentary to the rest of the arsenal.

The Smartgun is the only weapon that did not see significant changes from Gen 2.  There are new animations, really cool looking new effects though.

You can’t have a game with aliens in it and not have a flamethrower.  It’s just kind of mandatory!  Conceptually, I struggled with it, so I wound up spending a couple of days, literally, googling flamethrower images.  There were so many different types, so many great ideas, I couldn’t decide in which direction to go.  In the end I wanted something that looked “military”, and not makeshiftedly constructed with duct tape and such.

Alien Arena’s “BFG” got a completely new, original concept for Gen 3.  Probably along with the Alien Blaster, I am most proud of how it came out.  It’s vicious, weird, and brutal.  The animations are intimidating to say the least.

Alien Arena’s most feared, and most unique weapon is the Minderaser.  The entire concept of this weapon is unique, as every two minutes it spawns in place of a regular weapon, adding a dimension to deathmatch that I’ve personally not seen prior(we introduced this around 2011 or 2012 if I recall).  One firing mode shoots a little “spud” out that tracks down players and instantly vaporizes them. 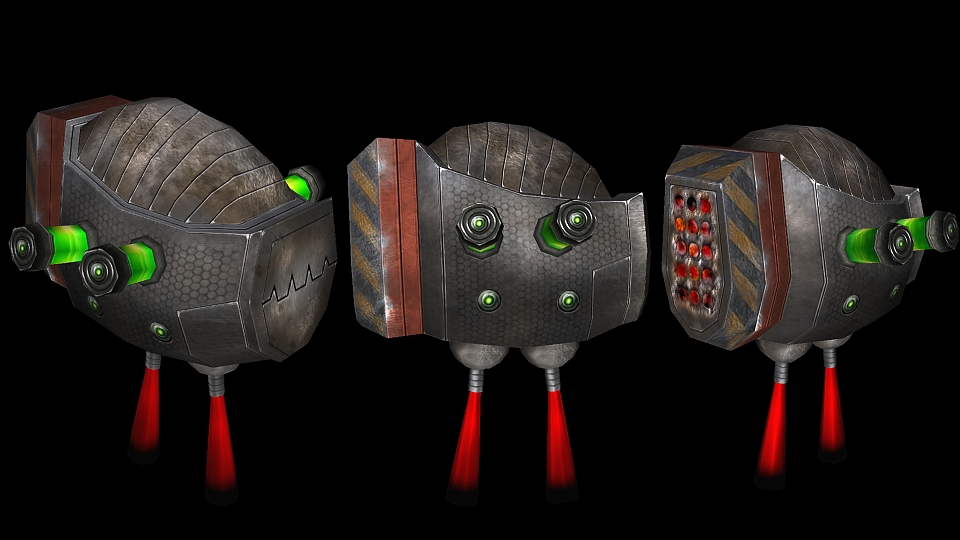 The second mode plants a mechanical spider that lays in wait killing players until it is destroyed.

Both modes also remove a frag from it’s victims total “erasing” their memories of it.

There are no upcoming events at this time.